Amongst the 12 calendar months, June and December are the only ones with three birthstones, none of which an alternate one.  Based on tradition, alternate birthstones are chosen due to the rarity or lack of availability of the attributed main birthstones. June is related to the zodiac sign, Gemini, the twins. And those born in June can select the pearl, Alexandrite, or moonstone as their birthstone.

Throughout history, innumerable traditional birthstones have been used, corresponding to the zodiac signs rather than the calendar months, used historically as amulets and charms and believed to possess special powers and mystical properties.

The commonly Accepted history of birthstones dates back to the Breastplate of Aaron, a ceremonial religious garment from Biblical times. The twelve gemstones on the Plate represented the twelve tribes of Israel and corresponded with the 12 signs of the Zodiac the 12 months of the year.
The gemstones representing the calendar months have varied throughout centuries and even today we can find the commonly accepted birthstones according to Hebrew, Roman, Arabic, Italian, Russian, Hindu and Polish traditions.

Pearls: Teardrops of Mermaids or Drops of the Moon?

Mythology in certain cultures would have us believe that pearls are the teardrops of mermaids or angels and in others, probably drops of the moon that fell into the sea! Historians, however, claim that pearls were discovered by human beings as they searched for food.

Whichever of the two hypotheses we are inclined to believe in, pearls are magnificent gemstones of organic nature not to be searched for in the obscure depths of Planet but produced by living creatures living in the deep waters throughout the world and have maintained their cultural and mythological significance in every nation on earth.

During the early Renaissance era, pearls were considered symbols of prestige and nobility by the Royal Courts of Europe, almost inaccessible outside the royal circles. The introduction of cultured pearls contributed to the widespread distribution and accessibility of pearls and they soon became available in all items of jewelry such as necklaces, earrings, bracelets, rings, and more. Their popularity has remained intact due to the timeless elegance they exude and their neutral color which makes them appropriate for all occasions and outfits.

Viewing the pearl collection where you will discover a fascinating collection of pearl jewelry from all eras and of all styles:

In the domain of necklaces, pearls have played a very significant role as they were confined to chains and beads during the Middle Ages due to the insufficient supply of beads and the importance of pendants and necklaces which were as a rule worn by both genders.

We have traveled a very long way from those days in which beads of different kinds constituted the only material to produce a neck ornament. Our choices of necklaces and pendants today have increased to encompass all styles set with lustrous and magnificent pearls of different colors, reminiscent of Art Deco, Art Nouveau, Retro and other vintage styles: The collection of pearl jewelry items presented on www.doverjewelry.com encompasses most of the existing and popular pearl varieties. These include Akoya and Mabe pearls, white and gold South Sea pearls,
and Tahitian Black pearls, the latter amongst the rarest and most highly prized category of pearls. Tahitian pearls grown in French Polynesia are the sole type with a natural dark color which appears in a rainbow of exotic shades. South Sea pearls are amongst the largest and are used for statement pieces of jewelry. Although they can reach up to 18mm in diameter, the ones offered on the market usually range from 10 to 14 mm in size. Akoya and Mabe Pearls as well as Tahitian pearls belong to the family of saltwater pearls and are grown in bays and atolls in several places around the world, whereas Freshwater Pearls are grown in lakes and reservoirs in China.

Selecting the appropriate type of pearls is primarily dependent upon one’s budget and of course, personal preferences regarding the shape and color of the organic gem one intends to purchase.

Grading of Pearls Prior to Purchasing Pearl Jewelry:

With the exception of Tahitian black pearls were grading and export of pearls is managed and controlled by the French Polynesian Government, and to a certain extent South Sea pearls, the grading of pearls is a difficult task, because no standard criteria are known to consumers.

At Dover Jewelry & Diamonds, we provide a detailed description of the pearl category, mentioning the nacre and luster of the gem and guarantee the pearl as
genuine and authentic. It is important to purchase your pearl jewelry from a source you trust and recognize as knowledgeable in grading their pearls.

We invite you to consult our experts who will be delighted to extend every advice and assistance deemed necessary.

The second birthstone for the month of June and the gemstone for the 55th wedding anniversary, Alexandrite is an extremely rare and expensive gemstone and therefore known only to connoisseurs and serious fans of gemstones. Referred to by some as “emerald by day, ruby by night”, the fascinating gemstone displays remarkable changes of color at different times of the day: Green in daylight and red when exposed to incandescent light. A variety of the gemstone group of chrysoberyl , Alexandrite would be an exquisite gem for high-quality jewelry, provided it can be acquired!

Moonstone acquired its name from Roman historian Pliny, who wrote that the gemstone’s appearance shifted with the phases of the moon. Moonstone has primarily a bluish tone but can vary in color and appear yellow, gray, peach, green and pink, displaying at times a cat’s eye effect or asterism.

The earliest source of moonstone was in the mine close to Adularia in Switzerland which gave birth to the term adularescence which is an optical phenomenon and refers to the stone’s fascinating characteristic resembling the ‘floating glow of moonlight’.
The finest classical moonstones are colorless and transparent with a blue shimmer and originate from Sri Lanka. The sources of high-quality blue moonstones have gradually been mined out, causing the prices to rise accordingly.

As implied by its name, moonstone is closely associated with lunar mystery and magic. It’s calming, balancing energies can supposedly attune to natural biological rhythms. Also known as the traveler’s stone, it is believed to protect travelers at night. Moonstone is used to treat insomnia and sleepwalking, encourage sound sleep and create pleasant dreams. It has been used as amulet since the gemstone has been known to human kind and continues to be amongst the most popular gemstones for jewelry items.

Top 10 Safety Tips for Traveling with Your Jewelry 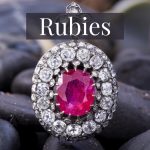 Rubies – The Color of Love 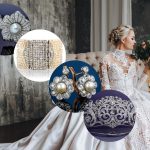 Can I Rent Pearl & Diamond Jewelry For My Wedding?

Your Guide To PEARLS: June’s Birthstone & The Classic Wedding Jewelry

What’s the best Diamond & Gold Jewelry to take with me this Summer? 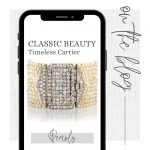 Classic Ways to Accessorize with Pearls on Your Wedding Day 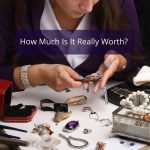