Even though rare to procure, Dover Jewelry & Diamond has for many years strived to purchase unique Etruscan Revival jewelry to present on our website. It has been a great experience to see that such items have all had positive and rewarding resonance on the part of our valued clients. Such reaction has encouraged us to read a few lines about the origins of the civilization we know as Etruscans.

Prospering between 950 and 300 BC, the Etruscans occupied a region in Northwest Italy, while leaving unanswered questions about their exact origins due to lack of historical inscriptions. The only knowledge available of these people is based on the study of their monuments and artefacts. It is believed that they migrated to the region we now call Tuscany where their culture developed rapidly by means of acquired new tools and trading.

The great achievement of this ancient civilization manifested themselves in their skillfully planned and constructed buildings and artefacts and the very unique techniques they applied to handcrafting jewelry. The latter can be divided in two eras, namely Early Etruscan and Late Etruscan . From the 7th century BC until the 5th, a period during which their culture developed to full extent, the Etruscans produced the most beautiful pieces of jewelry, characterized by high skill and enormous variety.  The Early Etruscan jewelry applied vivid colors, faience and glass beads, showing certain inspiration by the Greek art of jewelry.

The most famous technique developed and used by Etruscans is their perfect granulation that was applied without any soldering.  It consisted the covering of a gold surface with minute good spheres. This difficult process called ‘colloidal hard soldering’ remained a mystery to the jewelers until the year 1870 when Alfredo Castellani  discovered the secret from goldsmiths in a remote village in Italy. The discovery enabled jewelry designers and manufacturers to launch the new popular Etruscan revival style.

Etruscans demonstrated incredible lightness and precision in their workmanship, forced upon them by the scarcity of gold.  They used gold wire in their filigree works, particularly the most beautiful spiral beaded wire made by rolling a knife edge over a smooth wire which produced a screw-thread like decorative wire.

These unique features of Etruscan jewelry are being revived in Italy and other parts of the world, appreciated for the beauty  and precision inherent in the pieces. 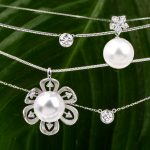